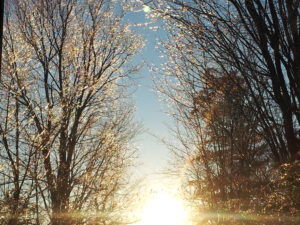 So here we are, it is Christmas Eve and we know how the story goes from here. On the home front however, we have just had to make the decision that my mother-in-law will not be going to church or anywhere else to do anything anymore because she is now too weak. And so the long wait is just beginning as she becomes more and more bed-bound. Those of us with faith find comfort in reimmersing ourselves in the sacred stories of promises God made and how those promises were fulfilled. And thus there is light and love in the gathering darkness of the personal circumstances of our lives. But for caregivers, for those committed to this difficult path of self-sacrifice, consideration of how God took care of these outcasts can give us hope. For in the nitty gritty of real life, He made their personal struggles, their love, the milieu in which his chosen son would be born and formed into everything he was created to be.

When we are in the trenches, just trying to survive, God and hope might seem far away. Joseph is forced to travel with his heavily pregnant bride-to-be in order to fulfill their Roman occupiers demand that all citizens be enumerated in their home towns. This is the latest turn of the screw for Joseph and Mary who have already been dealing with the gossip and disapproval of her extra-marital pregnancy and now are struggling together towards the birth in less than ideal conditions. To make matters worse they cannot even get a room at the inn but fortunately are given permission to shelter in the stable. And so here this young virgin must open her birth canal with no support, giving birth in unhygienic, cold circumstances. It is no wonder many mothers and babies perish under similar conditions. The pain and fear must have been hard to bear.

Meanwhile God was preparing the light that out of nowhere would transform their darkness, giving them hope, strengthening their faith for their long journey as an outcast family bearing a social burden of shame but the promise of God’s choice of this miracle baby.

When God chose to announce this momentous birth, he sent an angel choir to the outcasts of society – the shepherds, not to priests, leaders, pillars of the church, but to raggedy shepherds, the lowest of the low in that society. At the same in the heavens a new star arose that spiritual, wealthy men from outside Israel beheld, signaling that this son would be light to the nations and not just Israel.

So for the stressed but happy parents first came the shepherds the same night he was born. What they told Joseph and Mary would have resonated in their hearts over the years of raising their outcast son. When the wise men showed up a couple of years later, again they would have been bemused by their message, and the gifts would have financed their flight to Egypt and getting them set up as refugees while they waited for the murderous Herod to be replaced.

Having promised to raise God’s chosen one, they endured many trials and found themselves on the fringes of their conservatively religious community. Nonetheless God’s light broke through the darkness and most surely they were blessed.

If you have found resonance with these reflections on the existential reality of feeling like an outcast, then perhaps you also realize that as one of God’s children you too may have his light and love break forth in your life regardless of the dark circumstances that weigh you down. As a caregiver, follower of Jesus or one who has suffered, you are one who too can be blessed and in that blessing become a blessing to others. May the light that dawned in the darkness with Jesus’ birth dawn in you!