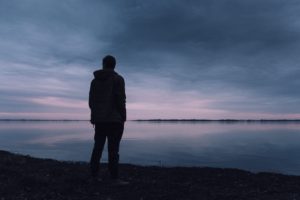 What is it with our creator and outcasts? His big move in penetrating to the depths of human experience was to create outcasts out of his chosen son, out of his mother, out of the man who would raise him as his son? All throughout his relationship with his chosen people you hear him decrying the powerful and rich for not taking care of the widows, orphans and the poor – that is the outcasts of society. But here he is turning faithful common people into outcasts as the fulfilment of his plan.

Poor Joseph, engaged to a lovely young God-fearing woman who then has to admit to him that she is already pregnant and he knows that he is not the father. The trust they had been building together, the hopes and dreams he had for her, for the children she would bear him, all smashed in an instant. And why? Because God told her to do it? Oh come off it! He was heart-broken!

Joseph probably spent many tortured nights before deciding to quietly break off the engagement leaving her to her fate and salvaging his reputation and protecting his standing in this small religious town. But then his darkness, his private struggle, was breached by God sending the angel to him to tell him to take Mary as his wife regardless.

Just like that, God made him an outcast as well as Joseph takes Mary as his wife despite her pregnancy. Comforting to have God resolve his struggle after causing all the trouble in the first place. But some resolution. And if this was not enough, he now must go back to his home town to parade his pride and shame before all. What a struggle, everything is soured and difficult, despite his strong sense of God’s call. How can doing the truly right thing feel so wrong?

Us caregivers understand the blessing of self-sacrifice, understand the costs, even the curse endured in being such a channel of blessing. This is also true for followers of Jesus who find themselves called into the dark night of the soul, into breaking their old patterns of desiring status, security and keeping anxiety at bay by fitting in as comfortably as possible with the rest of their family and community. These brave souls made following Jesus the highest priority in life, and then were totally bereft as dark feelings swept in blanketing everything, causing them to lose their sense of connection with God, their trust and whatever identity they had gained in following Jesus.

Life is such a slog, even when we believe that God has called us into the darkness. Life is such a slog. We get it Joseph. That must have been a long journey to Bethlehem with your heavily pregnant wife-to-be. But like us, you were in it for the long haul. Poor, blessed Joseph.